The Aston Martin DBX is the British carmaker’s first SUV in 108 years of its existence.

After just over a year of its global debut, Aston Martin has brought its first ever SUV – the DBX to our shores and has launched it at a starting price of ₹ 3.82 crore, (ex-showroom, Delhi) which is just the base price. While there are a plenty of standard fitments on this Aston Martin, it is also highly customisable and you will need to shell out extra cash for everything extra. The Aston martin DBX is essentially a crossover rather than a true blue SUV, but has got enough capability and elements to take on challenging terrain and beaten surfaces in its stride. But before diving into those details, let’s take a moment to look at this absolutely gorgeous machine. 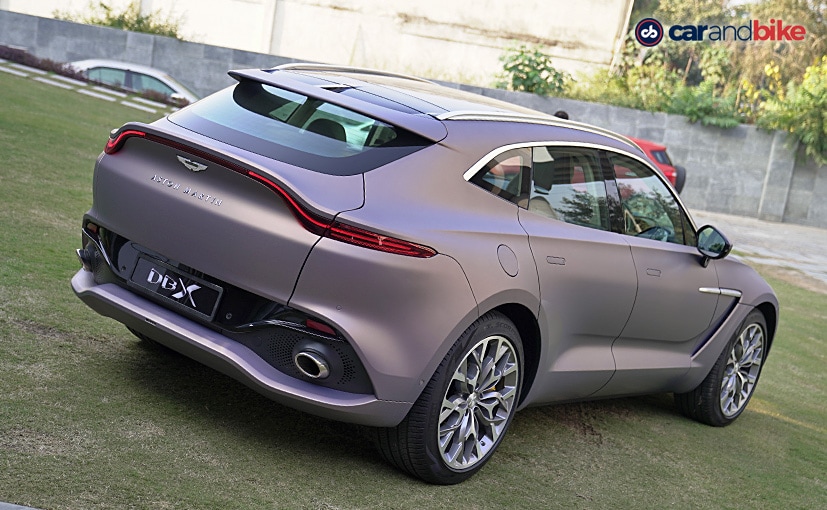 We absolutely love this Satan Solar Bronze body colour that changes shade in daylight and the DBX looks beefy yet very urban, having aesthetics right on point. You just cannot mistake it for anything else but an Aston Martin, courtesy to its Vantage inspired silhouette and that wide ‘DB’ grille making for a butch face. In fact it’s the widest grille ever on an Aston martin and you get a sense of its overall proportions when you actually see the car in flesh. And the design itself is so seamless that nothing on this crossover feels out of place, be it the headlights or even the DRLs below in the bumper that integrate in a very flush manner. Then there are some cool and very functional design elements. For instance, these flat “shake hand” door handles about which folks at Aston Martin say that we are actually “shaking hands” with the DBX when we enter the car. But they have been really thoughtful in incorporating the running board with the body panel so that you don’t end up getting your trousers soiled while entering the car. The sharp character lines on its hood and along the sides do a good job in masking the bulk of this over 5 m long crossover and while the wheelbase too measures at over three metres, the contours on the door shape the muscles quite aesthetically along with adding to its aerodynamics. 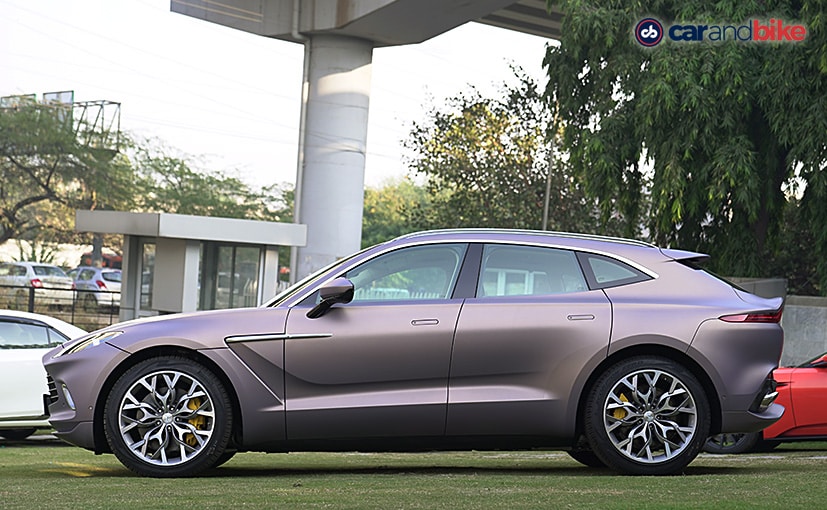 The Aston Martin DBX measures over 5 m in length and has a wheelbase of over 3 m.

Speaking of aerodynamics, the tapering roofline is further extended with a spoiler for optimum down-force and lesser drag, but more than that it adds to its sex appeal, especially when you look it in profile. But what is even sexier are these ribbon patterned 22-inch gunmetal alloy wheels that instantly grab eyeballs and they are standard as well. What we also can’t help from admiring are these wide frame-less windows that we fancy a lot. Then element like silver inserts on the fenders, fine chrome detailing on the window line and minimalist piano black detailing on the wing mirrors enhance its looks with the way they have been balanced. And the same impression continues at the rear where the sloping rear windscreen merges with duck-tail kind of treatment on the boot and the conjoined sleek taillights very appealingly covers the entire width, slightly extending towards the sides. Down in the bumper, there are exhaust chrome tips at both ends for that V8 aural appeal and you also get a bold piano black treatment here which apart from adding to the looks, also prevent the surface from heating up. But above all, it’s the way the muscles have been moulded and curved around the bends and corners is what magnifies the design language and makes the DBX the most stunning crossover to look at. 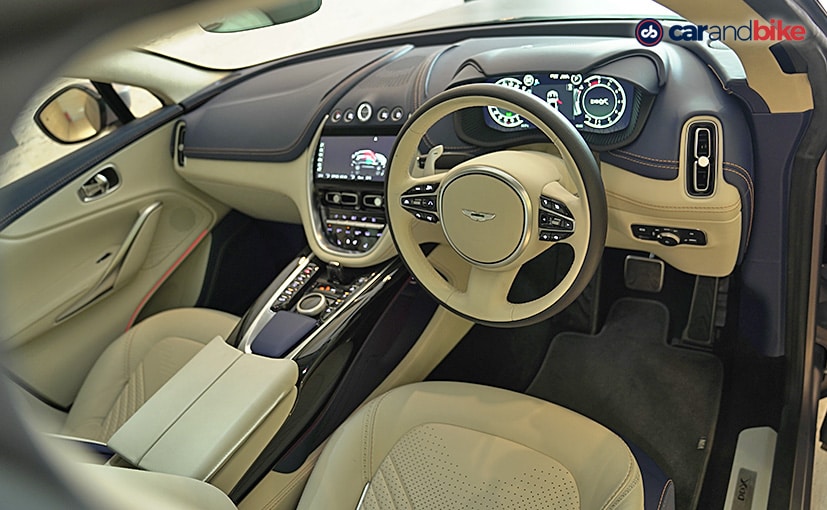 The cabin of the Aston Martin DBX is highly customisable and is draped in A-grade materials.

Well it’s the cabin that better equates with that big price tag and you get a true sense of its plush and premium appeal. It’s one of the most opulent interiors and everything here is highly customisable with trims and inlays and is draped in soft touch A-grade material. The interior on this particular model is finished in dual-tone beige and indigo colour while you get dual contrast stitching on the upholstery and Aston Martin logo the seats’ headrests. The central console is finished in piano black in this particular model but again can be personalised with your choice of wood inlays as well. You do get several buttons on the central console to toggle driving modes and operate other functions along with a rotary dial and home buttons for the 10.25-inch TFT infotainment screen. 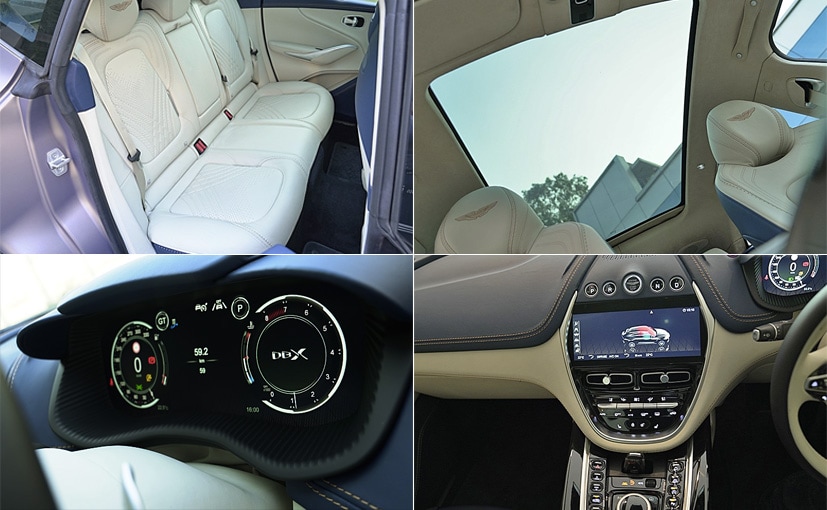 The Aston Martin DBX gets a 10.25-inch TFT screen and a 12.3-inch instrument cluster.

Yes! It’s not a touchscreen and you can only access it from the central console, but getting used to it is just a matter of time, thanks to the easy and clutter free layout and crisp graphics. It offers Apple Carplay and is coupled with a 14-speaker (13 speaker + 1 subwoofer) Aston martin has custom built surround sound system, but it doesn’t get Android Auto or connected car tech which in our opinion is a big miss in today’s day and age. Then there’s a 12.3-inch instrument cluster offering super sharp graphics along with a sporty layout and is very detailed with almost all information from driving modes, to navigation display, real time fuel economy, cruise control info, infotainment display and driver assist guidance among others. You also get a heated steering wheel as an option on this the DBX while standard features list includes, heated and ventilated perforated seats, three-zone climate control, surround camera view, a huge panoramic glass roof, 64 ambient lighting power adjustable seats and steering wheel (both reach and rake) among others. 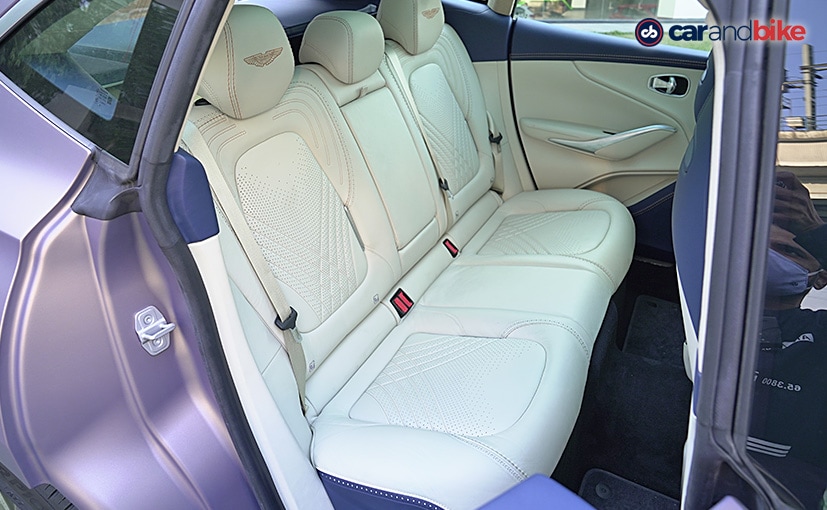 The interior trims and inlays can be customised as well.

The Aston Martin DBX is underpinned by an all-new bonded-aluminium platform, especially design for this model. Under the hood of the Aston Martin DBX sits a Mercedes sourced 4.0-litre, twin-turbocharged V8 petrol motor that puts out 535 bhp at 6,500 rpm and 700 Nm of peak torque at 2,200 – 5,000 rpm, while is mated to a nine-speed torque convertor automatic gearbox. And at 4.5 seconds to triple-digit speeds, this mammoth crossover is up there in super SUV territory, especially given that it tips the scale at 2245 kg. Moreover, it can clock a top-speed of 291 kmph and abetting its dynamics at higher speeds are air suspension at all four corners. It’s coupled with active dampers and a 48-volt anti-roll system that applies 1,400 Nm of pressure on each wheel to maintain its agility and sustain body rolls and lateral movements. 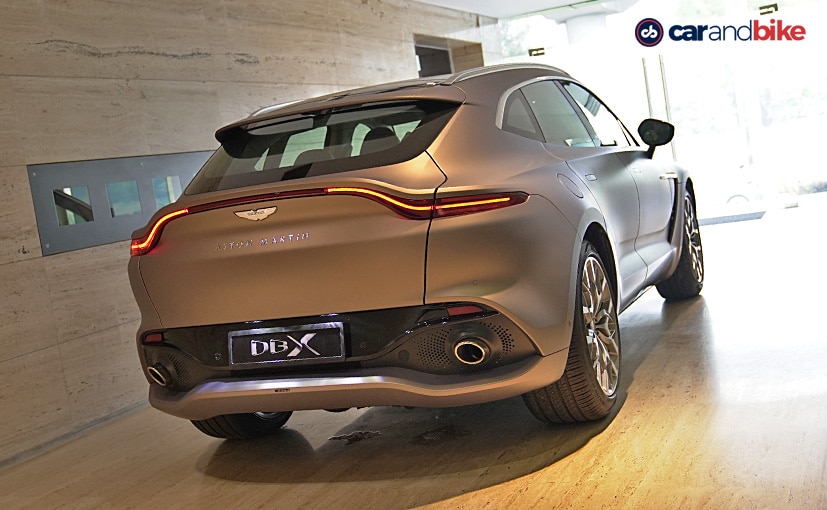 It is powered by a Mercedes sourced 4.0-litre, twin-turbo V8 petrol motor mated to a nine-speed automatic gearbox.

The air-suspension can also raise the car by 45 mm or lower it by 50 mm depending on the drive modes, in a bid to take on a wide range of surfaces. Now that system also aids ingress and egress of the car, making it convenient to step inside and get out of it. It’s essentially an all-wheel drive car with a transfer case that primarily sends power to the rear wheels but can channelise it to the front wheels as well when in need of more traction. Also, there is an electronic differential lock at the rear along with a central differential lock and it has a ground clearance 190 mm making for a good enough approach and departure angles for mild off-roading. 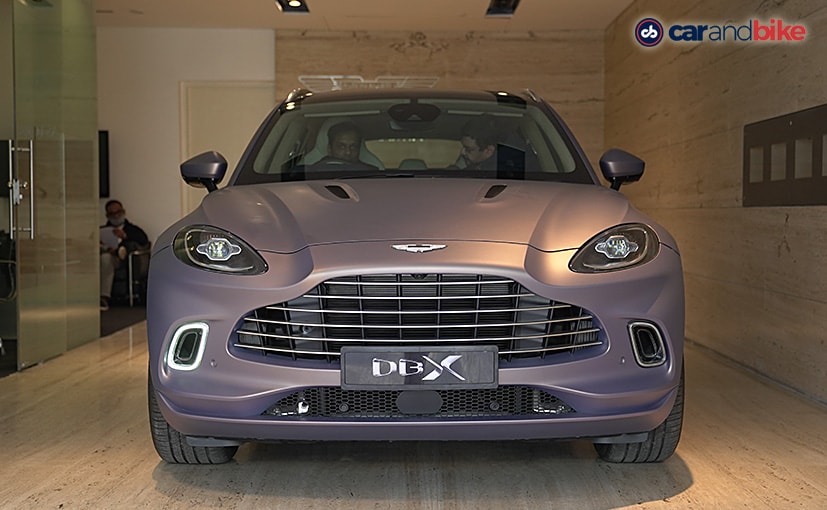 The Aston Martin DBX can clock triple-digit speeds in 4.5 seconds.

In keeping with the trends, the Aston Martin DBX is the British carmaker’s first practical and do it all model in 108 years of its existence and we actually saw it coming after the Rolls Royce Cullinan and Lamborghini Urus. Along with the Cullinan and Urus, it will also rival the likes of the Porsche Cayenne and Bentley Bentayga and as its rivals, will be sold as a completely built unit (CBU) in India.