Bengaluru-based racer, Akhil Rabindra has signed up with Aston Martin Racing Academy for the second consecutive year. The 24-year-old continues his association with the British factory racing team, having been the only Asian driver to be signed by the AMR Driver Academy in 2019. He is part of the 12 elite drivers selected from across the globe, who will undergo training and assessment with the AMR team in the UK. The best performer gets the opportunity to sign a contract with the factory Aston Martin Racing Team as a junior driver in 2021.

Speaking on his retention, Akhil Rabindra said, “I am extremely excited and delighted to be on the AMR Driver Academy again this year. Last year was a very strong year where I went from strength to strength. This year my focus is to build further on last year’s success and get the junior contract at the end of the year. I look forward to the season starting and getting on the podium again. I would like to thank my sponsors, ASM Technologies, SmartFix & Forms and Gears for their continued support and faith in my dream.”

Rabindra made his Aston Martin debut in the US last year when he participated in the IMSA SportsCar Championship and put up a strong show during qualifying. The driver secured a pole position in the Road Atlanta round that was later disqualified, while the Road America round saw him secure P3 in the Aston Martin Vantage GT4 race car. The Indian driver went on to secure a finish in the top six at Laguna Seca in the following rounds.

The Aston Martin Racing Team and Akhil Rabindra also managed to secure a total of four podiums with the Vantage GT4 at the Mugello Circuit. The driver secured a second-place finish in the 2019 24H GT Series European at Circuit de Spa-Francorchamps in Belgium. This was followed up with a second-place finish once again in the first race of the GT4 European Series at UK’s Brands Hatch Circuit, and a third-place finish in the GT4 class at the 2019 24H GT Series European held at the Brno Circuit in the Czech Republic. 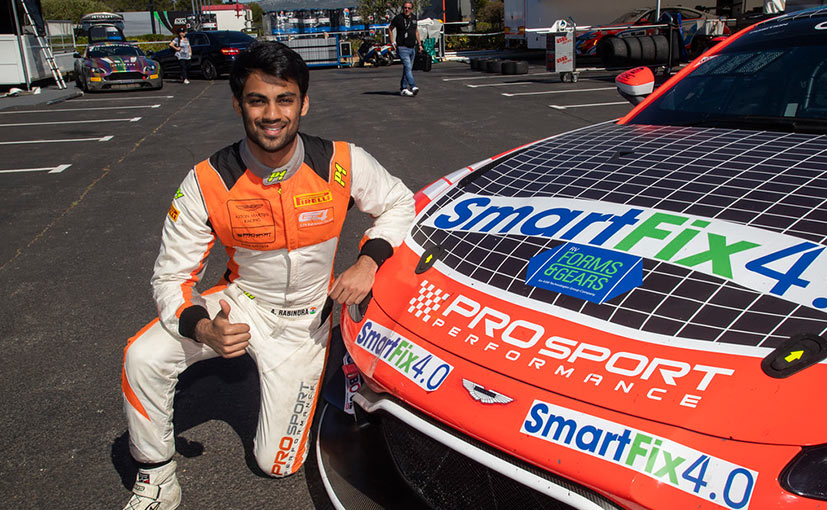 The Aston Martin Racing Academy works in tandem with Aston Martin Racing motorsport team, which competes in GTE, GT3 and GT4 racing around the world. The factory team made its racing debut in 2005 with the DBR9 and has gone on to build several customer cars as well as develop the V12 engine for the Le Mans prototype.