The 2021 Jaguar F-Type is officially here, and proportionally, it looks a whole lot like the current F-Type. There’s nothing wrong with that, as the F-Type is still one of the best looking cars on sale today. Jaguar didn’t want to mess with that winning formula, so it took a light brush to the British sports car.

Despite the silhouette remaining largely unchanged, the finer styling points are significantly different. Jaguar gave the F-Type a larger grille, slimmer horizontal headlights, a new clamshell hood and reshaped side air intakes. Its taillights are smoothed out, but they feature Jaguar’s “Chicane” light graphic from the I-Pace. Thankfully, the V8’s menacing quad exhaust design remains for the high-performance R trim.

“F-Type has always had great proportions and stance, and our latest design is all about enhancing those key Jaguar values. Our aim was to make the car more contemporary, more purposeful, and even more dramatic,” said Adam Hatton, Jaguar exterior design director.

When it comes to engines, Jaguar is staying the course for the most part. The base engine is still the 2.0-liter turbocharged four-cylinder that makes 296 horsepower. Jag took the manual transmission away for the 2020 model year, and the eight-speed automatic transmission remains the only option for 2021 as well. The upgrade engine is still the supercharged V6 that makes 380 horsepower, though the 340-horsepower version is no longer available. Jaguar promises it still sounds spectacular. If you want maximum performance, the F-Type R is the way to go for the time being. Power is up to 575 horsepower and 516 pound-feet of torque in the R — these figures happen to be exactly the same as the SVR, but 25 horsepower and 14 pound-feet of torque more than the previous R.

Jaguar didn’t reveal plans for a SVR version of this new F-Type down the road, but we assume one must be in development. Expect even more horsepower from that car if/when it arrives. As of now, Jaguar claims the R will hit 60 mph in 3.5 seconds, the same time as the SVR. Top speed is electronically limited to 186 mph. Every engine configuration comes with an active exhaust system as standard or optional. The R features a new “Quiet Start” mode that’ll help you maintain a friendly relationship with your neighbors.

Jaguar made some handling improvements to the new F-Type, too. New springs and anti-roll bars complement recalibrated continuously variable dampers. The claim is better low-speed comfort and more high-speed control. Both the electric power steering and the stability control system have been re-tuned, as well. Hardware-wise, Jaguar says the rear suspension knuckles are now aluminum die castings. This, along with larger wheel bearings and revised upper ball joints reportedly “increase camber and toe stiffness by 37 percent and 41 percent, respectively.” The brake-based torque-vectoring system was re-tuned to quell understeer. Jaguar is also now using Pirelli P Zero tires that are 10 mm wider on the R. 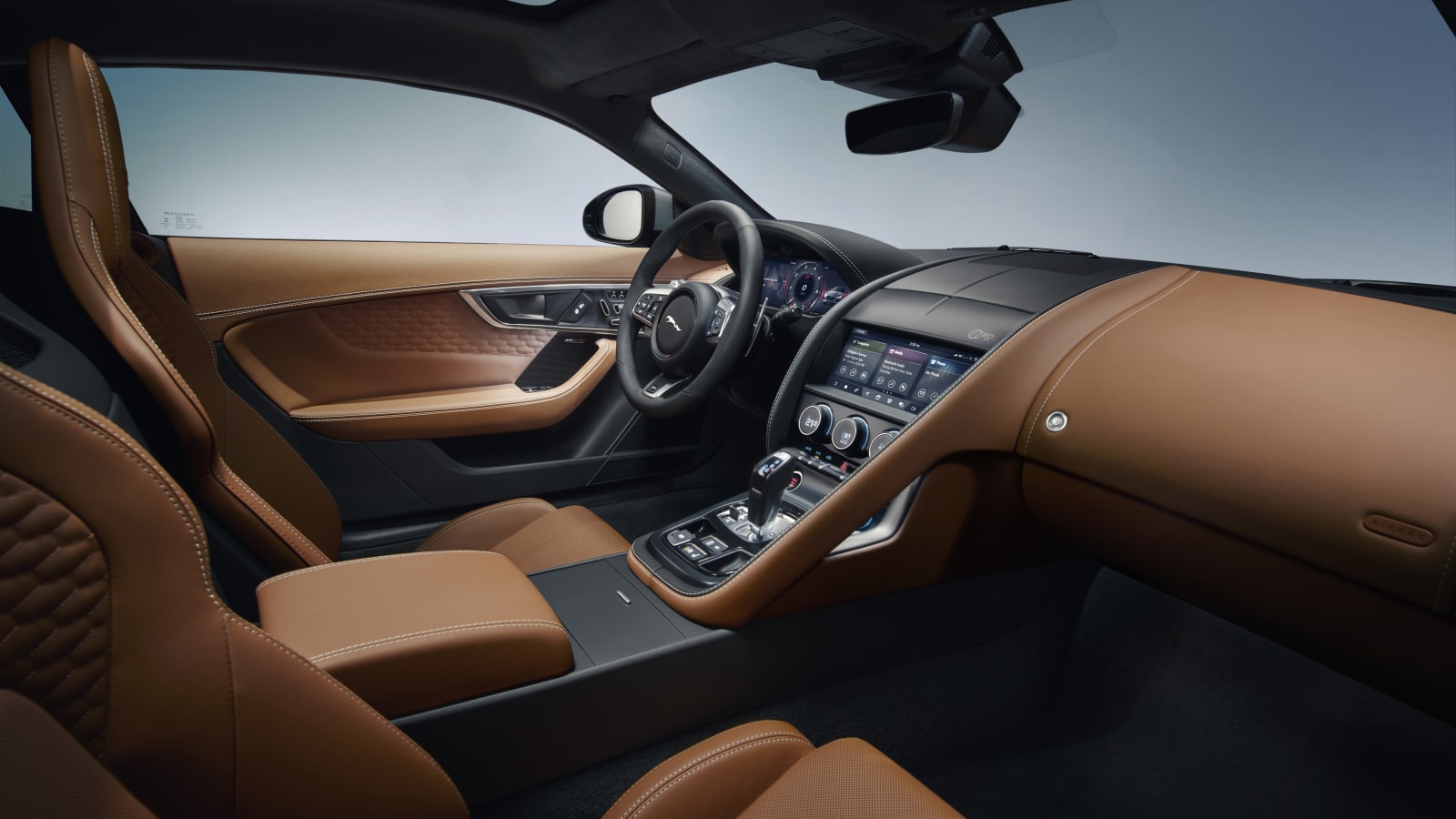 Most of the interior design remains the same, but the tech advances. The physical gauges are displaced by a 12.3-inch configurable display. Then, JLR’s latest 10-inch center touchscreen is used, complete with both Apple CarPlay and Android Auto as standard. Two different seats are available, and Jaguar offers a wide array of customization options for materials and colors.

There’s no on-sale date or price for the time being, so look out for that information in the coming months. Most of the photos available initially are of the coupe, but we do get one glimpse of the convertible (above). The first new F-Types available will be of a First Edition model that’ll have exclusive styling touches to stand out from the rest of the pack.