The 2020 Nissan Armada is a full-size, three-row, body-on-frame SUV. Now in its second generation, which debuted for the 2017 model year, this big SUV boasts a lot of space and comfort, and feels quite luxurious despite a starting price almost $20,000 less than the Infiniti QX80, with which it shares its underpinnings. There’s only one engine option, an adequately potent but thirsty 5.6-liter V8, and it is offered in rear-wheel drive or part-time four-wheel drive.

Despite a slightly lower starting price than the Chevy Tahoe, Ford Expedition and Toyota Sequoia, the Nissan Armada offers a number of active safety features that the rest don’t and boasts best-in-class standard horsepower and towing (though you can’t opt for any more than what’s in the base configuration). If you need a big, comfy ute that’s feature-rich, easy to drive and can seat seven or eight people without breaking the bank, the Nissan Armada is a decent choice. However, we’d recommend taking a look at the Expedition in particular as it offers better fuel economy and a much larger third-row seat.

Little has changed for the 2020 model year. All trim levels now have standard heated side mirrors. Additionally, there is now an optional 22-inch wheel package ($2,250) for the Platinum trim level, which adds the 22-inch, 14-spoke forged aluminum-alloy wheels and 275/50R22 all-season tires that come standard on the Platinum Reserve. 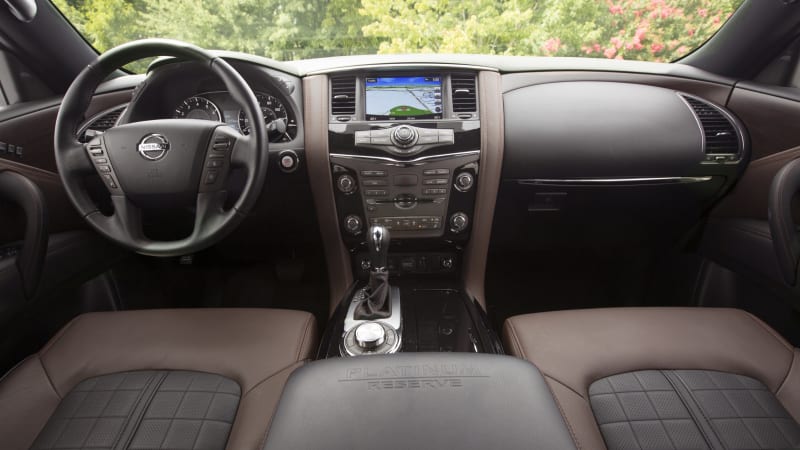 The Armada’s looks and feels a lot like that of the Infinti QX80, with plenty of wood and soft leather. The seating position is high and upright, and combined with big windows, you get a commanding view of the road. The seats are wide, flat and soft — comfortable, but not particularly supportive, which is something you should consider on a test drive to make sure it feels right to you.

Some of the controls on the center stack are a bit difficult to reach. The infotainment system, while easy enough to use, is dated, and unfortunately there is no available Apple CarPlay or Android Auto. The tech offerings in Ford and GM’s full-size SUV offerings are notably superior. In Platinum and Platinum Reserve trims, the dual-screen rear entertainment system comes standard. 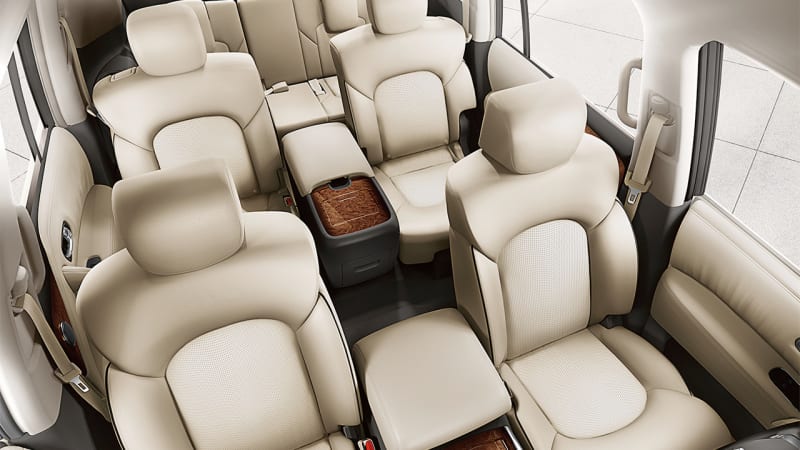 How big is the Armada?

If you’re considering buying an Armada, you should be the type of customer that often needs a lot of cargo space, a lot of seating, or both. Thankfully, the Armada does both well.

The interior of the Armada, as its oversized exterior would indicate, is quite spacious. We were able to move a 60-inch television despite having a child in a car seat taking up a seat in the second row. The high load floor is a bit of a pain when loading in bags of groceries, but it’s lower than the Tahoe/Yukon’s and is helpful when unloading something large like the aforementioned TV. The power-folding third row helps, too. First- and second-row seating is comfortable even for larger passengers, but the third row should be reserved for children or adults with a smaller frame.

In terms of its competition, it’s basically mid pack. The Ford Expedition has more legroom in all three rows, especially in the third row where full-size adults fit comfortably with room to space. The Sequoia isn’t quite as big as that, but does exceed the Armade. The Chevy Tahoe and its GMC Yukon sibling have less second-row space than the Armada, and its third-row is barely usable. Then again, unlike the Armada, GM offers the longer Suburban and Yukon XL, which do squeeze in a few extra inches.

As for cargo volume, the Armada has quite a bit. While the 16.5 cubic feet behind the third row less than what you’d see in large crossovers like the Kia Telluride, the 95.4 cubic feet maximum is quite accommodating if you don’t need to put more than one other person in the car. The Armada’s cargo volume is just slightly larger than the space-inefficient Tahoe (15.3/94.7 cu ft), but less than the Ford (19.3/104.6) and the beastly Sequoia (18.9/120.1).

The Nissan Armada’s single powertrain option is a 5.6-liter V8, paired with a seven-speed automatic transmission. With 390 horsepower, it outguns the base engines of the Chevy Tahoe (355 hp), Ford Expedition (375 hp) and Toyota Sequoia (381 hp). It produces an ample 394 pound-feet of torque.

The tradeoff for this engine is the Armada’s fuel economy. The 2WD version gets 14 mpg city, 19 mpg highway and 16 mpg combined. With 4WD, it sacrifices 1 mpg across the board, at 13/18/15 mpg. For comparison, the Toyota Sequoia is similarly poor, but the base Chevy Tahoe gets 18 (2WD) or 17 mpg (2WD) combined, while the base Ford Expedition and its powerful, turbocharged V6 gets 19 mpg regardless of drivetrain. When talking about mpg figures in this range, these differences matter a lot.

The Armada is big, but it is easier to drive than it looks. Steering is a bit numb and vague, so we had to pay a bit more attention than we’d like to keep it tracking straight down the highway — that’s not completely unexpected. It’s easy to navigate through city streets as visibility is excellent. Even putting the seat as low as possible, you’re still sitting up high, and you’re looking through tall, upright glass all around. The corners are easy to spot, and the steering is very light, so you don’t have to wrestle it in slow motion to drive it.

The ride is excellent and roll is subdued for such a hulking beast, even though it utilizes standard dual-tube shocks. It absorbs bumps very well, and it’s impressively quiet. Even the tires didn’t transmit much sound over pavement imperfections. The transmission is smooth, if a bit slow to shift. The engine noise doesn’t impede into the cabin too much, but it sounds good when it does.

What more can I read about the Nissan Armada?

Our editors talk about what the Armada is like to drive in real, day-to-day traffic. They talk about the power, ride, interior and technology, and their overall impressions of the Armada in normal driving duties.

This was our first crack at this generation of the Nissan Armada, where we found it to be a good, comfortable SUV to drive despite its size and body-on-frame underpinnings. Fans of the overseas Nissan Patrol might be disappointed that this isn’t as hardcore as the SUV it’s based on, but customers looking for a cozy, three-row ute with a hint of luxury for a reasonable price will be pleased. 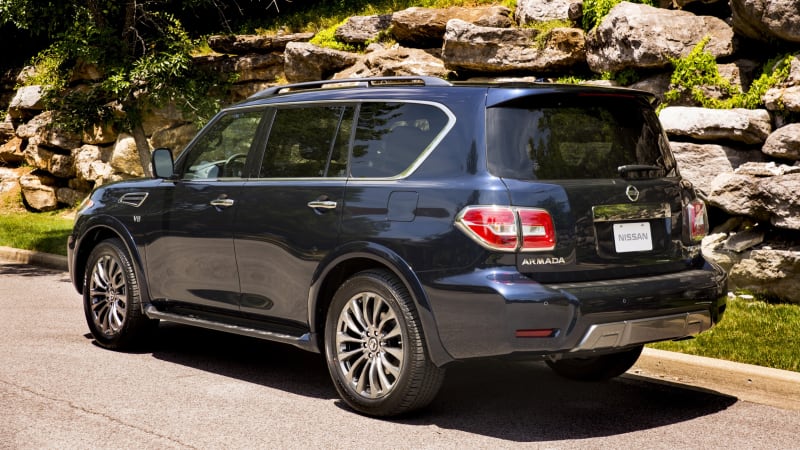 What features are available and what’s the Armada’s price?

You can find a full breakdown of features, specs and local pricing for the 2020 Armada here on Autoblog, but the MSRP for each trim level and its base body style/drivetrain combination is listed below with destination included.

What are Armada’s safety equipment and crash ratings?

The Armada hasn’t been crash tested for the 2020 model year as of this writing. NHTSA gave the 2019 Armada an overall safety rating of four out of five stars, and we don’t expect that to change for 2020. It earned three stars in frontal crash and rollover tests, and five stars for side crash.